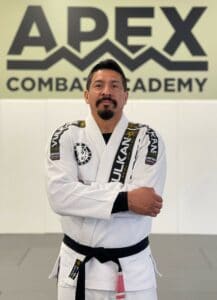 Professor Lee Holloway began training in martial arts at the age of 16 in Taekwondo, Hapkido, and Kenpo Karate, and later in high school, Muay Thai. After Highschool, Lee enlisted in the United States Army as a communications specialist, and began training Muay Thai full time in Kitzingen, Germany. After 4 years he transferred to Ft Campbell, KY where he received his Black Belt in Kickboxing from WKA World Kickboxing Champion, Andy Jones.

While training with Andy in Kentucky, Lee was asked to teach stand-up fighting to the 5th Group Special Forces Soldiers by a Green Beret who was impressed by his diverse martial arts knowledge. In return, the Green Beret taught him submission wrestling. This started Lee’s journey into ground fighting!

After several combat deployments to Iraq, Lee took an assignment as a recruiter for the Colorado Army National Guard. It was during this time he discovered his passion for Brazilian Jiu-Jitsu. Lee focused on training with multiple prestigious instructors, and with hard work and dedication, received his Black Belt from Master Carlos “Caique” Elias in 2016.

Lee believes Jiu-Jitsu is a martial art that can benefit everyone at any age and any life stage. He enjoys sharing the art with those ranging in experience from novice to world competitors. He is especially passionate about training other veterans, law enforcement/first responders, and empowering women through self-defense.